Thirty two runners lined up for the National which was to be run on very heavy going. Favourite was Aintree debutant FRENCHMAN`S COVE, a white faced chestnut, who, sporting a prominent sheepskin noseband would be easy to spot. He had won the Coventry Chase at Kempton last time out and also the Hermitage Chase at Newbury earlier in the season. The leading Irish challenger was the Tosse Taaffe trained SOLFEN who was comparitively lightly raced compared to his rivals with just three starts this season but  they had included an impressive win in the Haydock Park National Trial. Last years hero NICOLAUS SILVER had drifted in the market on the day but he was in excellent form having added the Grand Sefton Chase to his National triumph in the autumn and then won the Great Yorkshire Chase at Doncaster, a race that was then of far more significance than it is today. KERFORO,  another Irish challenger was the form horse of the race winning five times in Ireland including the valuable Thyestes and Leopardstown Chases. He had flopped in the National Hunt Handicap Chase at the Festival last time and had also finished behind a little known horse called Arkle in a novice hurdle at Navan. SPRINGBOK had been running prominently in big handicaps but had only managed to get his head in front on one occasion when winning at Kelso in October. VIVANT a winner at Nottingham, Leicester and Stratford and SUPERFINE with wins at Wolverhampton and Leicester under his belt this season also came in for some support. There were two other National heroes in the field, both now in the veteran stage, MERRYMAN II ridden by his third rider in as many Nationals (Dave Dick took the honours this time) and MR WHAT who had not won now for five seasons.

To follow when I get hold of a copy of the racecard.

Owned by N.Cohen. Trained by Ryan Price at Findon, Sussex.

Kilmore rode in two more Nationals finishing sixth in 1963 having survived being kicked by a faller at the water and at the age of fourteen he fell at the fence before Bechers second time on what was his final racecourse appearance. Prior to that at he won two small chases in the winter of 1963 at Windsor and Fontwell. He was retried to Findon where he lived for a further seventeen years. 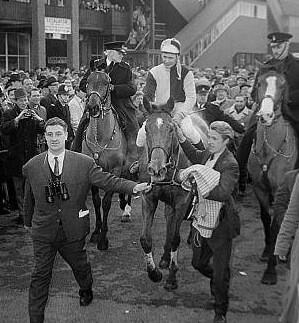 *A RECORD NUMBER OF FINISHERS*

Ayala injured a foot in his next race and, lightly raced was never the same horse again. His form figures after his Aintree triumph read a miserable FP0F-0PFP-P. He fell at the Chair in the 1964 National and was the sole first fence faller a year later. He last raced at Lingfield in 1966 and died later that year.