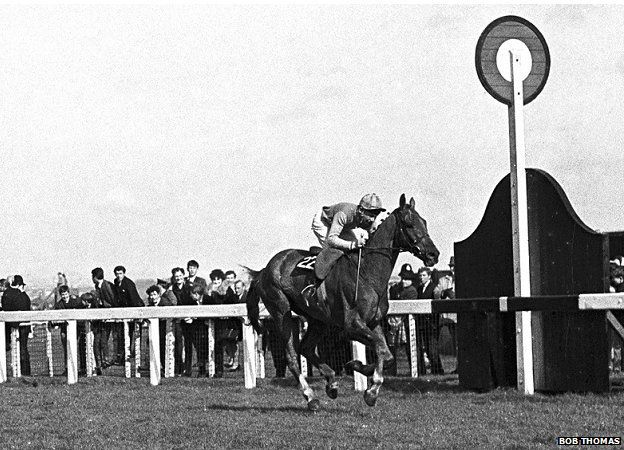 Somehow Aintree survived. The County and City Councils now struggled with the thorny question of what to do with Aintree and Mrs Topham just about kept the racecourse going. With minimum investment, the racecourse looked tired and jaded, deserted and unloved for three hundred and sixty two days of the year (sixty four if you included the first two days of the Spring meeting). There was however another bumper entry for this, the fourth "Last Grand National" and there was another large turn out of forty five including seven runners from Ireland. Heading the market were three horses who could all claim to have been desperately unlucky twelve months earlier, DIFFERENT CLASS, RUTHERFORDS and RED ALLIGATOR as all three had been prominent when the carnage at the twenty third fence began. Owned by Hollywood heart throb Gregory Peck, DIFFERENT CLASS had started the season with two disappointing efforts but had then won a competitive amateur riders race at Sandown followed by a bloodless win in the two runner Coventry Chase where he beat National rival SOME SLIPPER. RUTHERFORDS was without a win all season but had run credibly in the Great Yorkshire Chase, leading when brought down at the twenty third in 1967 he had been able to continue finishing down the field whilst RED ALLIGATOR had run on to finish third. Convinced he would have won that day, young Brian Fletcher, at twenty three one of the youngest riders in the race was hoping for better luck this year. Other fancied riders included a glut of Aintree newcomers all with winning form in their recent races, MOIDORES TOKEN was unbeaten in three starts this season, FRENCH KILT had won his last three starts as had leading Irish fancy (in what was a pretty weak challenge from the emerald isle this year), Thyestes Chase winner GREAT LARK. The lightly raced MASTER OF ART and REGAL JOHN, who had won the Whitbread Trial at Ascot, considered to be the best form in the race also came in for much support. There was considerable media interest in the antics of the "Galloping Grandfather" , Tim Durant, now in his sixty eighth year and having his third consecutive ride in the race. This year his partner was the Irish trained HIGHLANDIE, who had been off the course for seven months before his prep race when he had finished a useful second to another Irish entrant VALOUIS in a small race at Navan in the beginning of March. And what of FOINAVON ? In four races this term, he had only managed to beat one horse. Running in different colours and sporting bright orange blinkers it was perhaps only his status as a previous National winner that prevented him from starting amongst the 100-1 outsiders. 66-1 seemed a little optimistic. Lightning couldn`t strike twice...could it ?

Red Alligator finished unplaced in the Scottish National on his next start. Lightly campaigned the following year he narrowly failed to win the Haydock Park Grand National Trial before starting favourite for the National. He never got into the race and was behind when he unseated at the nineteenth. He did win three times during 1969-70 but again at Aintree failed to shine and he was struggling in last place when he unseated at the eleventh fence. He did not race again but his name lives on in Bishop Auckland as a pub was named after him and it is still there. As the wrangling over Aintrees future continued the public, perhaps were growing tired of the off course arguments and there was a considerably smaller field this year of thirty, a sign perhaps that patience was  wearing a little thin as we approached the fifth "Last Grand National". Favourite was last years winner RED ALLIGATOR, a position he held clearly on the basis of his very impressive win twelve months ago as he had shown little in three starts this season, HIGHLAND WEDDING on the other hand was on a four timer. He jumped (he had finished the National in 1966 and 1968) and we knew he stayed as he had just won his third Eider Chase at Newcaste. Regular rider Owen McNally was sidelined so popular Irishman Eddie Harty took the ride. He was enjoying a good meeting having steered HIGHLAND WEDDINGS stable companion Dozo to victory in the Topham Trophy. Champion jockey Terry Biddlecombe was on board FEARLESS FRED, the winner of the WD & HO Wills Trial Chase at Haydock (the forerunner to the Red Square Vodka Chase). BASSNET was also popular in the market despite having failed to get past the first circuit in two previous attempts at the National. He had won the valuable Coventry Chase at Kempton on his last start before Aintree. Whilst British Movietone and Pathe had been broadcasting in colour since 1962, 1969 marked the first year that the BBC beemed colour pictures on television adding a new dimension to the great race.

THE GRAND NATIONAL STEEPLECHASE £17,849 to the winner.

HIGHLAND WEDDING next ran in the inaugural running of the Midlands National at Uttoxeter which at the time was run in May. Throwing his chances away with a mistake at the twenty first fence he was eventually pulled up. Falling on his next start at Ascot in December he was retired to his owners in Canada.